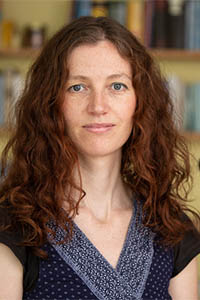 Christina Voigt studied media design and computer science at the University of Applied Science Augsburg and holds an MA in Visual Anthropology from FU Berlin. In her master thesis Christina analyzed Virtual Nature and Landscapes in Second Life where she pursued answers related to our relationship with nature in times of ecological destruction.

Since 2003, Christina has worked as a filmmaker and video artist in Berlin where she directs her own documentaries in addition to working for numerous dance, theatre and music productions, e.g. Sasha Waltz & Guests. One of her long-term filmmaking focuses is in Nepal, where since 2003 she has been highlighting the challenges of foreign development aid.

In the last decade Christina has expanded her documentary video work by implementing stage visuals for documentary musictheatre production.

Since 2012 she is a lecturer at HTK Berlin for Filmmaking, Film Studies and Media Studies and conducts a hands-on film workshop on “Digital Identity“ at University of Applied Sciences Berlin.