For her master's thesis in Visual and Media Anthropology Yumi Watanabe went to the Peruvian rainforest. She investigated the dreams that the Shipibo healers have during their trainings called dieta and analyzed them using scientific methodologies. In this interview, she talks about how she came across her research topic and her plans after her master studies. 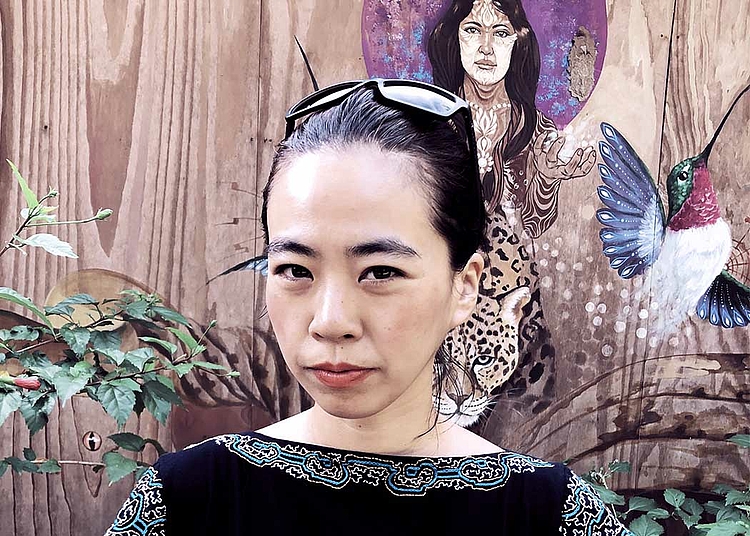 Recently, you graduated from the master's program Visual and Media Anthropology at HMKW Berlin – and got a very good grade for your thesis. Congratulations! For your thesis you did your research at the Amazonas in Peru about "Human-Plant-Kinship". That sounds pretty amazing! Please tell us more about it!

My thesis attempted to visualize ontological realities of healers of the Shipibo, called onayas, residing in Eastern Peru. To do so, I focused on their dreams seen during the training called dieta and asked an experienced onaya to interpret these dreams. I then connected the dream interpretations by an onaya and the Shipibo cosmology and scrutinized onaya-plant spirit relationships built in dreams through the lens of the Shipibo cosmology.

Dieta is the training of onayas in which they ingest specific plant maestro and follow restrictions such as fasting. Plant maestro is a collective term of drinkable plants that are used for the dieta. Onayas consider each plant maestro to have its own ‘world’, as well as spirits, and the knowledge to heal people.

According to what onayas explained to me, only if they successfully interact with the spirits of plant maestro through dreams seen during the dieta, knowledge of present surroundings, prophetic information, and icaros (healing songs) are imparted to them. When they finally complete the dieta and ingest ayahuasca at the healing ceremony, plant spirits that they practiced the dieta with take over their bodies and let them sing icaros to heal others.

In short, for Shipibo onayas, dreams seen during the dieta serve as the media where they figure out how to build relationships with plant spirits to finally acquire the healing capacity to aid others. Focused on such roles of the dream, I recorded a total of about 60 dreams seen by two experienced onayas, Carlos and Maria (pseudonym), during one month of dieta with the same plant maestro. I then asked Maria to interpret each dream while focusing on how she considered to build relationships with plant spirits. This was because I expected these dream interpretations may offer salient implications on human-plant relationships that are often formed through embodied and semiotic means of relating. However, my initial attempt to do so supported the notion put forth by Tedlock: ‘The dream interpretive statements may properly be understood only in the context of respective ontologies and religious and psychic lives in each society’ (Zuni and Quiche Dream Sharing and Interpreting’. In B. Tedlock (Ed.), Dreaming: Anthropological and Psychological Interpretations, Santa Fe, NM: School of American Research, 1992:105-131). In the case of the onayas, this entailed paying close attention to the concept of niwe and neto that comprise the cosmology of the Shipibo. The diagram below illustrates the cosmology of an onaya.

Based on this theoretical proposition that links dream interpretations by onayas to the Shipibo cosmology, I classified the dreams seen by Maria and Carlos based on her interpretations and scrutinized the kind of relationships built and their shamanic purposes from the perspective of niwe and neto. By doing so, I finally depicted the ontological reality of onayas in which they mundanely co-exist with various non-human beings and continuously fabricate kinship with plant spirits to embody healing capabilities.

Could you tell us a bit about how you discovered your research topic? What was your greatest learning from this research experience?

I first visited Carlos in 2017 to practice the dieta because my Peruvian mestizo friend recommended him as an experienced and well known onaya. So, my initial motivation to stay with him was not to conduct research. Nonetheless, I collected ethnographic data from July 2017 to August 2019 and archived them for the project of nativesoon that is a collective project with my husband.

On August 6, 2017, I wrote in my fieldnote, ‘We asked Carlos to keep a dream diary for one month during the dieta. I passed him a notebook so that he could write down his dreams’. This was my husband’s idea, as he thought that, in this way, we could figure out how Carlos perceived the world. At the beginning, I did not expect much about the outcome and knew nothing about the roles of dreams seen during the dieta. However, when Carlos came to me with 33 dream episodes written in Spanish, I became intrigued with dream interpretation. For example, the excerpt below is a part of his dream seen on the first day of the dieta.

In this dream, I arrived at a far-off village after traveling on a river by jhousou. Though the village was large, there were only three people living there. One of them was male, and the other two were female. This male was a king, and one of the females was a queen and his wife. The other female was a princess, their daughter. We got off the boat and headed over to a building that was the king’s house.

His detailed depictions on whom he met, where he was, and what he did with those characters made me ponder the correlation between these dreams and the knowledge acquired through the dieta.

Hence, I looked for an onaya who could translate the 33 dream episodes, since I had left his place without asking him to interpret them. In April 2021, my Shipibo friends, born into an onaya family, recommended their kin onaya, Maria, to conduct the dream interpretations. So, I asked her to begin a month-long dieta with the same plant maestro that Carlos practiced with in 2017, together with my husband and me, and to interpret her own dreams as well as ours. This was how I had discovered the research topic and developed the fieldwork on it.

Through this research experience, I learned the importance of persistence and flexibility. I went to see onayas and kept asking. Though I often felt useless, I never stopped putting together a picture from dispersed, seemingly irrelevant pieces, inspired by conversations with Carlos and Maria. It was simply a beautiful moment in which I attempted to understand that they perceive the reality in a completely different way.

Why did you decide to study “M.A. Visual and Media Anthropology”?

I had sought to visualize ontological realities of onayas through academic lenses since I spent more time with them. I became intrigued to combine anthropological inquiry on onayas with visual techniques into embodied medium such as film, photography and an installation. To make such wish come true, visual and media anthropology was the only option.

In your opinion, from which experiences/courses/projects during your studies will you benefit the most in your future career?

Courses like “Space and Place”, “Media Activism” and “Auto-Ethnography” gave me a great insight into my future career. Especially, the subject that I worked on for the course of “Space and Place” could be a research topic in the future. I explored home garden as daily space for creating ‘actual’ entanglement with non-humans. Learnings that I acquired through this course enabled me to scrutinize relationships between humans and non-humans from the angle of space. It was such eye-opening experience.

What do you like the most about your studies/the study program in general?

The variety of the study program. I didn’t think it would be such interesting to learn antholopology. Plus the 2 weeks in-house class in Berlin campus was fabulous. I am desperate to see my classmates again soon in Berlin!

What’s your advice for (prospective) students who are thinking about studying Visual and Media Anthropology at HMKW?

If you look for an opportunity to combine academic inquiry with visual techniques, 2 years at this course would be full of excitement. In addition, it would be better to ask yourself whether you are self-disciplined. As this course calls for autonomy of students, those who prefer to learn with lectures and friends step by step in a physical classroom may have difficulties to catch up courses.

I am considering embarking on a PhD to learn anthropology specialized in relations between humans and non-humans. However, I am still pondering whether I continue to research on Shipibo onayas or begin to work on a comparative study about medical marijuana in Japan and other countries. In either case, I am now intrigued in visualizing fantasies or psychological constructs shared by a society, while depicting how these plants are banned or spreading over the daily space. While preparing for the PhD, I first want to show my work in exhibitions in which I seek to share the fruit of this research in the form of film and installation. Then, I’d love to release a compilation album of healing songs of onayas that had been recorded during my long-term fieldwork.

Thank you very much for the fascinating insights into your research. We wish you all the best for your future!