Alumna Johanna Koch pursues two professions with great enthusiasm: She has been working at the EUREF campus since the summer as a project manager in the area of marketing and business development. At the same time, she is active in local politics: In the current election, she was elected to the district council for the FDP Berlin Mitte. When we met her for a coffee, we chatted with her about her career start, her current jobs, and her goals for the future. 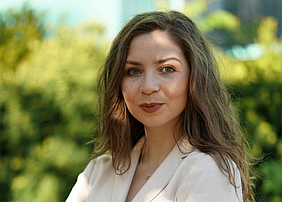 What comes to mind when you think about your studies at HMKW?

With my studies at HMKW, I took the first step towards professional development. After my FSJ (Voluntary Year of Social Service) and after I had started studying sociology and political science at a state university, I simply missed the practice there. That's why I decided to begin a program with more practical relevance at HMKW.

After graduating with a B.A. in Media and Business Psychology (dual), you recently started a job as a project manager at the EUREF Campus in Berlin. Congratulations! How did that happen and how do you like your new job?

I became aware of my current employer, EUREF AG, through my mandatory internship at the Berliner Wirtschaftsgespräche (Berlin Business Talks). They frequently held events there and I always found the place very exciting. Unfortunately, many Berliners do not know about it.

I finally heard about my current position through my network. I then applied for it in the traditional way and am now really happy to be able to do such an exciting job as a young professional.

In addition to your job, you are politically involved with the Young Liberals, are currently even the deputy district chairwoman for the Berlin-Mitte district, and were elected to the BVV (Bezirksverordnetenversammlung) in the election. Exciting! Please tell us more about your political work!

Yes, I am now deputy leader of the FDP parliamentary group in the Berlin-Mitte district council. My topics are economics and social affairs. At the moment, the committees are still being revised and then hopefully we can start working soon. In local politics, you're always in contact with people and always trying to find out which issues are particularly close to their hearts. I am very excited about the next 5 years.

I would say that the practical year at the Berliner Wirtschaftsgespräche was very formative for me. I worked there in the public relations department and was involved in around 150 events. I even conceived and implemented my own series of networking events there, "Dinner & Talk". This time was also important for me in terms of my current political activities, because it was here that I built up my network and consolidated my political attitude. Actually, I would have always classified myself as a left-wing liberal, but at the events I often encountered members of the FDP and quickly realized how progressive this party is. Media policy issues in particular, such as media literacy in schools, are very high on the FDP's agenda. That appealed to me even then - also because these areas were related to the focus of my studies, of course.

In addition, I've always been fascinated by working at the interface between companies and the public. That's certainly the reason why I've now also set my professional course in the direction of marketing and corporate communications.

Why did you decide to study “Media and Business Psychology”? And what made you choose HMKW Berlin?

A dual study program is simply even more practice-oriented: You can't get more practice than that! I also believe that an additional qualification - in the dual B.A. in Media and Business Psychology, this is the training as a management assistant in marketing communications - is always a benefit.

Definitely the great practical relevance! With the many hands-on experiences that you already gain during your studies and during the practical year, you simply know how to apply many things much faster in your job.

Which contents of your studies are part of your current job (as project manager as well as in your political work)? How do your studies help you in your work routine?

In media psychology, I learned how to decode content, which is particularly useful in my political work. In Information & Communication, I learned how to communicate messages to the public even better. The lessons learned in marketing are more conceptual ones: Here, I gained even more confidence in presenting thanks to the many pitches. Finally, business psychology is very helpful when it comes to the types of companies in which you work.

What I like about my work is the versatility and the many opportunities for taking initiative. At the same time, I like the self-determined work and the fact that I can set my own priorities. The downside is that you actually have to work independently and no one tells you what to do.

My new job (I have only started in July) and my first political mandate - that's a lot of new things at once. For the future, I would like to grow into both areas even better and develop routines.

I would also like to be able to pass on my knowledge to others in the future. In my opinion, it's very important to always be in a constant exchange.

Thank you very much for the interview. We wish you all the best and every success in your professional life and political work.