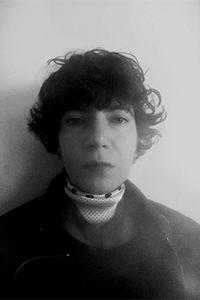 Dalia Neis is a writer, filmmaker, and sound artist. Dalia's doctoral research on cinematic representations of wind and the essay form engaged with the essay as a malleable genre across experimental writing and film practices, forming part of an ongoing inquiry into the representations of the invisible – be it an attempt to render visible the nonhuman force of the air and wind – or the films, figures and social movements that have been overshadowed by hegemonic historical narratives. Apart from making a cycle of film-essays, Dalia is co-founder of the expanded cinema, experimental musical/poetry group, FITH (now known as Dali Muru & The Polyphonic Swarm), and co-founder of Wanda-Portal, an imprint that releases albums and radio shows, which traverse the cinematic, literary, and sonic spheres. Dalia's book publications include Zephyrian Spools: an Essay, a Wind (Knives, Forks and Spoons press) and Hercules Road (MA Bibliothèque).