Depicting society as it is - that is the vision of Nicola Boyne, winner of the HMKW Media Scholarship and graduate of the dual B.A. Media and Event Management program. In a guest lecture, she told HMKW students about how she and a friend founded the book publishing company Ulila and successfully launched their first Wimmel book. 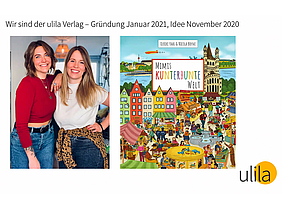 The founders of the Ulila publishing house. Photo: private

About 50 students from print media business and cross-media management courses were present when Nicola Boyne paid a (virtual) visit to her former university following an invitation from Prof. Dr. Friederike Bing. In her 90-minute talk, the HMKW graduate told of her surprising transition between event management and the print media:

After Boyne dropped out of her first degree program, it was time for an orientation phase. She did an internship at an event management company in Cologne. At the same time, she applied for - and won - the HMKW media scholarship. In 2018, Boyne successfully completed the dual degree program B.A. Media and Event Management - the starting point for a highly versatile CV.

Boyne has always felt very much at home in the event world, which is why she completed a traineeship at Avantgarde after graduating, where she accompanied rally events. She then joined Eurowings and visited many different countries as part of her job.  Her next stop was the advertising agency Counterpart, where she helped design campaigns for well-known clients. In the process, she quickly made her way up the ranks as a project manager and became an account manager for numerous clients.

"I walked the Camino de Santiago and asked myself, "is this really what I want?"" - Nicola Boyne

Instead of pursuing this successful path, the HMKW graduate decided to work as a freelance project manager. She used her acquired knowledge and former contacts and was able to implement the trade fair stand in Hamburg for Melitta, for example. Her next stop was the DFL (German Football League), where she worked for over a year instead of the planned four weeks. From her home office, she organized the creative projects of the in-house agency that develops campaigns for the Bundesliga and 2nd Bundesliga.

"I said to myself, I want to do something that is meaningful, that is my own. I've been looking for something like that for a long time, and I've had a lot of ideas to help someone or develop something that helps." - Nicola Boyne

And one more new twist in her career: The idea for Ulila Verlag came about as a result of a gift to her friend's son. For his first birthday, she gave him a Wimmel book.

However, the friends were surprised that there are often only stereotypical drawings in children's books and people with migration backgrounds or people with disabilities are reprensented rarely. That was something they wanted to change, because in their opinion, books should depict society as it is. Ulila and the hidden object book "Mimi's Colorful World" were born. Boyne contributed the know-how from her student days and agency past, her friend the creative impulses. After just a few weeks, the right illustrator was found and the desire to hold the book in their hands grew stronger and stronger. The founders started a crowdfunding and offered some beautiful ideas for sale. For example, buyers could have their names written in the book using the "You in the book" or "Your name in the book" offers.

"The book was sold out immediately. That was insane, since we hardly did any advertising. We just maintained our own Instagram channel." - Nicola Boyne