Solomon Mekonen completed his master's degree in Visual and Media Anthropology at FU Berlin - and now teaches in the program himself. He has also recently taken up a PhD position in the Department of Anthropology at the University of Oslo and is researching the possibilities of participatory filmmaking. In this interview, he told us more about his career, his work as a filmmaker, and his formative time as a VMA student. 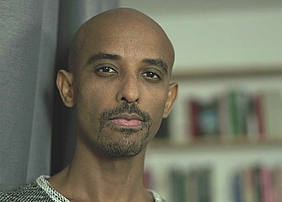 Solomon Mekonen, former student of the M.A. Visual and Media Anthropology and now HMKW lecturer and PhD student at the University of Oslo.

Recently, you were offered a position as a PhD research fellow at the department of anthropology, University of Oslo. Congratulations! Tell us more about your current research projects!

Thank you so much! My current research project will explore the prospects of participatory filmmaking and digital self-narration as a form of resistance and social intervention in relation to a marginalized group in Ethiopia and its diaspora. Having enjoyed undertaking a multimodal ethnographic research project in my time at the VMA program at Freie Universität Berlin, in this project I also intend to make ethnographic filmmaking an integral part of the research, both as a method and an output, alongside the dissertation.

Could you tell us a bit about how you became a PhD research fellow? How was the application process?

There is a research group at the department of anthropology, University of Oslo, which explores and experiments with forms of ethnography and ethnography as a form, which my research could relate to. The application process at the University of Oslo was rather straightforward. What one needs to do is explained clearly. One also doesn’t have to apply for funding separately, as it was the case in other institutions, say for example, in the UK where I was offered places but did not secure funding. There were, however, only two fellowship positions available at the University of Oslo.

You are also a filmmaker. When did you start filming? And what inspires you the most?

I was one of those impressionable kids who was mesmerized by the moving picture the moment I came in contact with it. The first filming experience has to be a wedding of my aunt, of which she praised the result but which I think was just ok. Then when I was studying my bachelor’s degree in Thailand, there were also some filming experiences but I was not quite satisfied. Therefore, I came to Berlin and studied a one-year practical filmmaking program, during which I started to do films professionally.

One has some idea in the mind and shoots, be it documentary or fiction, and one sees what one had imagined on screen – maybe not the exact same thing – but this process, almost of magical proportion, these imaginations turning into material, or should I say digital, outputs must be the one thing I most find thrilling in filmmaking.

After I studied the one-year practical filmmaking course I mentioned above, the issue of representation was becoming a big issue for me. Then, naturally, I was gravitating to anthropology more and more due to its (professed) concern for representation. I found a confluence of interest in both the visual practice of film and anthropology at the program, which was very explicit in its interest of visual representations beyond the Western world on its webpage. I applied and was accepted.

In your opinion, from which experiences/courses/projects during your studies will you benefit the most in your future career?

The course I am teaching now, which was written by Melody Howse, a PhD candidate at Leipzig University, has been the most beneficial for me when I was studying at the program.

I cannot stress enough how this course was crucial in helping me find my voice by balancing out the otherwise very stifling (for non-White students anyway) history and practice of anthropology and some of the courses, which seemed to have not yet, unfortunately, “joined” the Reflexive Turn of the discipline and were perpetuating archaic ways of doing things.

What’s your advice for (prospective) students who are thinking about studying Visual and Media Anthropology at HMKW?

The program affords you a certain freedom in experimenting with forms and methods, use it wisely. And don’t party too much as we did, it is easy to get lost in Berlin.

Thanks for sharing your experiences with us. We wish you all the best for your PhD and future projects.