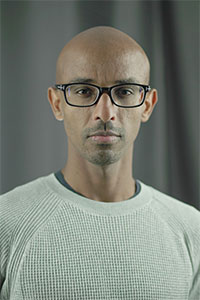 Solomon Mekonen is a PhD research fellow at the department of anthropology, University of Oslo. His research explores the ways in which ethnographic filmmaking as an audio-visual archive of experience can be used as a social intervention, political action, and an imaginative platform of alternative futures. Solomon holds a master’s degree in Visual and Media Anthropology from Freie Universität Berlin. His graduation film Emails to my Little Sister (2018) has been shown at more than 20 ethnographic and other film festivals and has received four awards and one honourable mention. An ethnographic film - Unreal Boys (2020) - he has worked on as a cinematographer and editor is the winner of Best Student Films category at the 2021 Society for Visual Anthropology Film and Media Festival. Solomon has also received a bachelor's degree in New Media Communications from the Assumption University of Thailand followed by a Cert. HE from Met Film School Berlin upon completion of one-year Practical Filmmaking courses.