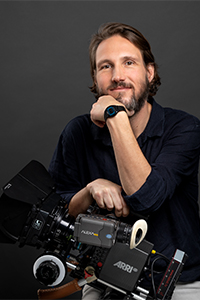 Mark Dölling is an international Director of Photography, Cinematographer, Photographer and Lecturer. Works all over the world and is based in the Cologne area, Germany. He was born and raised in a small town near Bremen, Northern Germany. In 1998 he moved to Bremen and started to work as an AC, Focus Puller and Audio Guy for TV stations, e.g. Radio Bremen (ARD). He started to work as a Cameraman for those networks in 2000. In 2001 Mark relocated to Berlin where he studied cinematography at Beuth (formerly TFH) University of Applied Sciences and graduated in 2005 (diploma, Director of Photography). He has since worked as a freelancer on various productions both domestically and abroad. In 2015 he devised the visual concept for a new true crime show called COPYCAT KILLERS, he then shot the first season (13 episodes) in Washington DC, aired on Reelz (national) and Discovery Channel/ID (international/among other TV stations worldwide). 2017, he returned to DC to shoot the entire 2nd season (20 episodes). Mark finished shooting COPYCAT KILLERS (3rd/last season) in 2018.

Additionally Mark has shot documentaries in the United States between 2015 and 2020 for Smithsonian, Red Bull, National Geographic and PBS.