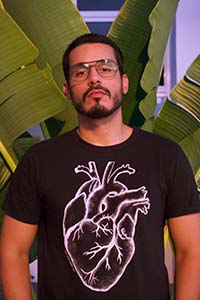 Leandro Goddinho is a Brazilian filmmaker dedicated to LGBTQ+ issues. He got selected for BERLINALE TALENTS 2018 and won more than 100 awards in Film Festivals around the world. In 2015, he was selected to the German Chancellor Fellowship for Prospective Leaders sponsored by Alexander von Humboldt Foundation to research and develop a documentary project on LGBTQ+ issues called “The World is round so that nobody can hide in the corners” (7 Awards).

His graduation Project DARLUZ (2009) won 38 awards and his 2016 short film Piscina (Pool) had its World Premiere at Palm Springs Film Festival, winning 46 Awards and being selected for more than 140 Film Festivals since then. In 2016 Goddinho was awarded the FUNARTE Fund to develop his first feature screenplay, and in 2017 he got the “New Screenwriters Fund” from the Brazilian Ministry of Culture to write his second feature-length film. He recently finished his Master in Media and Visual Anthropology at Freie Universität-Berlin holding a DAAD Scholarship for Foreign Artists.

In 2019, he released the short films Lolo, and Antes que seja tarde (Before it’s too late), winner of Cultura Inglesa Fund. Goddinho is currently in the pre-production of his first feature film, about digital activism in Brazil.