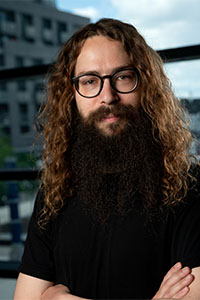 Dr. Gregory Gan is a visual anthropologist, filmmaker, and multimedia artist, currently holding a postdoctoral fellowship at the Collaborative Research Center “Affective Societies” at Freie Universität, and supported by the Social Sciences and Humanities Research Council of Canada. Gregory’s research focuses on post-Soviet memory, placemaking, and material culture amongst Russian-speaking transnational migrants. Gregory’s doctoral research (University of British Columbia, 2019) focused on narratives about migration amongst Soviet and post-Soviet Russian-speaking migrants to Paris, Berlin, and New York. His training as a filmmaker resulted in two acclaimed ethnographic films, Turning Back the Waves (2010), and The Theory of Happiness (2014), nominated for Best Canadian Documentary at the Hot Docs International Film Festival. Gregory expanded his practice to encompass multimedia work, touring with a mobile, interactive installation, Still Life with a Suitcase (2017-2019), where audience members were able to decide the narrative flow of the work by manipulating smart objects.

Gregory’s postdoctoral project was aimed at developing a collaborative interactive multimedia work and art exhibition on the demolition and reconstruction of Soviet-era social housing in a transnational context, and was tentatively titled “Picturing Postsocialism: A visual anthropology study on the affective dimensions of “renovation” of panel homes in post-Soviet space." This project has since been halted, and research is being modified with sensitivity to the events of the Russia-Ukraine war. Gregory has been a part of the MA Visual Anthropology program since the Spring of 2020, and he continues to live and work in Berlin.