Christopher Rust discovered his enthusiasm for corporate communications during his studies. After working for Hamburger SV and the agency schoesslers, he has been responsible for internal and external communications for all German hotels of the Scandic Group since August 2019. In the interview we asked him about his career start and his previous experiences. 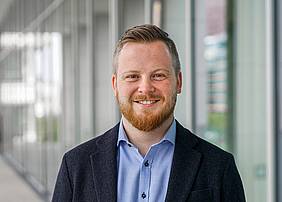 What comes to mind when you think about your studies at HMKW?

The familiar atmosphere. Since I was one of the first students at HMKW, there were only about 20 fellow students and two seminar rooms at the beginning. But even as the university grew, one always had the feeling of knowing everyone.

You acquired a Bachelor of Arts in Journalism and Corporate Communications at HMKW Berlin. What is your current job position?

I am responsible for the internal and external communication for all German hotels of the Scandic Hotels chain. Scandic Hotels is the largest hotel company in Northern Europe with almost 300 hotels in six countries.

Did you get any further work experiences prior to your current position that you would like to share with us?

Immediately after my bachelor's thesis I worked for two years in the press department of Hamburger SV. Afterwards, I worked three years at the PR agency schoesslers as a Communications Manager.

I realized relatively early, in the first or second semester, that I was more drawn to corporate communications than to journalism. I was able to combine this with my previous studies in sports science, first with an internship at DSC Arminia Bielefeld and then at HSV.

Why did you decide to study “Journalism and Corporate Communications”? And what made you choose HMKW Berlin?

I had already completed several internships at the newspaper and student radio during my school years. I had decided to study at HMKW because it was also possible to start in the summer semester and the course of studies is very practice-oriented, unlike at public universities.

Which contents of your studies are part of your current job? How do your studies help you in your work routine?

Also in the field of corporate communications, various texts, interview formats, videos, etc. have to be created. The most helpful thing, however, is to know how the other side thinks, especially how the journalists think, what they need and in which form.

What I appreciate most is that I can work creatively. At the same time, this is also the biggest challenge, because the competition for the attention of the target group is very high in every area.

Which characteristics should students have that want to study „B.A. Journalism and Corporate Communications“?

Mr Rust, thank you very much for the interview. We wish you much success and all the best for the future.