A HMKW production team from Berlin and Cologne has finished a video feature about the city DōngGăng in the province of Liáoníng, right on the border with North Korea. See the result of the intercultural city marketing movie project here. 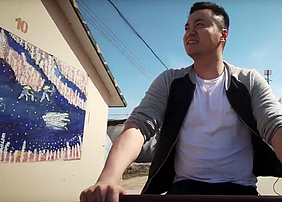 Still from the video: HMKW student Boyun Wang exploring the city of DōngGăng.

When a delegation from HMKW presented DōngGăng's city administration a video about the study opportunities in Germany in September 2017, the city’s representatives appreciated it so much, that they summoned a team from our university to come to the north of China in order to produce a similar feature about their city.
Only a few months later, the Berlin HMKW lecturers Jost Listemann (director) and Sarah Meister (camera), the Cologne HMKW graduate of the B.A. Media and Event Management Nicole Hennich (camera assistance), the Berlin HMKW student Boyun Wang (protagonist of the film), the Mandarin lecturer of HMKW Cologne Mrs. Aimin Feng and the university rector Prof. Dr. Klaus-Dieter Schulz went to DōngGăng to comply with this special request.
They were received with wonderful openness and friendliness. Their video shows the multiple facets of the city of DōngGăng, the economic and cultural features of one of the most exciting and dynamic regions in the world, from our European perspective.
We thank DōngGăng City and we thank Ms. Feng and Ms. Ling Jiang, head of the Abakus Academy in DōngGăng, who have established contact with the local cultural department and organized the trip. We hope for more exciting projects, cooperation and mutual exchange in and with universities and other institutions in China!