At the beginning of May, a film crew of representatives from HMKW Berlin and Cologne traveled to DōngGăng to shoot a video about the city and the region, commissioned by the local cultural office. 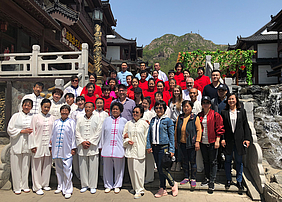 The Liáoníng province, in the far Northeast of China, is arguably one of the most interesting regions worldwide, at the moment, due to its close vicinity to North Korea, its geopolitical significance as a major hub between China, Korea, Russia and Japan, and its rich cultural heritage, as well as economic potential.

Hence, we were especially delighted about the invitation by the Federal Office of Cultural Affairs of DōngGăng to shoot a video featuring the region, viewed from a European perspective. A delegation from DōngGăng had been visiting HMKW Cologne before in 2017, university rector Prof. Dr. Klaus-Dieter Schulz returned the visit in the same year.

Once again, thanks to the excellent organization by Mrs. Aimin Feng (Putonghua lecturer at HMKW and head of Zhōng Academy in Cologne) and Mrs. Jiang Ling (head of the Abacus Academy in DōngGăng, one of whose pupils won the world championship in mental calculation a few years ago), the filming and contacting endeavour was a brilliant success.

The production were headed by HMKW lecturers Jost Listemann and Sarah Meister, with Berlin student Boyun Wang as protagonist, and Nicole Hennich‚ graduate of B.A. Medien- und Eventmanagement from HMKW Cologne, as assistant.

The crew produced footage which captures the diversity and very special, often surprising features of this fascinating region.

Back in Berlin and Cologne, post production work started immediately—we are looking forward to present the result here soon.

Boyun Wang acted as protagonist for an HMKW image film before. Photo: HMKW