Europe and the western world are increasingly turning towards the East, and HMKW, too, stengthens its efforts of international networking, especially with educational institutions in China. 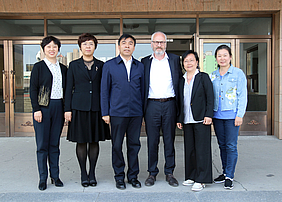 Our intercultural endeavors place a special focus on the Liáoníng province, in the far Northeast of China, bordering Russia and North Korea, as one of the most fascinating, culturally richest, and politically as well as economically most dynamic regions. And we are especially delighted about the openness and friendliness, with which we were met.

After our first mutual visits to Cologne and DōngGăng/DānDōng in 2017, only a few months later, the first projects took shape. Invited by the vice mayors Mr. Song Yang, Mrs. Zhuhong Lin, and Mrs. Meihua Zhang, as well as the head of the culture department, Mr. Tianjiu Wang, a crew of six HMKW members flew to the port city of DōngGăng in May 2018, to film a video about the region from their specific German point of view.

Prof. Dr. Klaus-Dieter Schulz, rector of the HMKW, seized the opportunity of the film production in Northeast China to further enhance connections and deepen existing relations. Several cooperation plans were agreed upon. Notable examples are a student exchange with the vocational center for pedagogics, technology, arts and media in Fèng­chéng, headed by Mr. Mingchen Sun, and a planned cooperation with the goal of establishing a new educational institution for teachers, together with the office of culture and education of DānDōng, headed by Mr. Xiaoxi Yú.

Mr. Xiaoxi Yú, head of the department of culture and education of DānDōng city

A model of the vocational center Fèngchéng (with approx. 3.000 students)