On Monday, the exchange students from Bengaluru, India, presented their media projects, which they had been producing during the summer school program at HMKW Cologne. Their journey continues on Tuesday with a trip to HMKW Berlin. 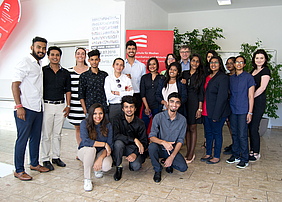 During their first two and a half weeks in Germany the exchange students from JAIN University in Bengaluru, India, have been producing several radio and video features. HMKW’s prorector Prof. Dr. habil. Martin Beckenkamp, Prof. Dr. Bettina Lendzian, who led the journalism summer school and leads the Department of Journalism and Communication at HMKW Cologne, as well as several students and employees of HMKW Cologne attended the final project presentation.

The seven audio and movie projects deal with cultural peculiarities and intercultural differences. In their radio features the students commented and reported tongue in cheek on the differences in traffic, “toilet culture”, stereotypes of Germans as well as on their stay in Germany and home sickness.

While working together with HMKW lecturers Hans Hausmann and Heinz Hoppe on their video projects, the students got to know how to work with camera equipment and post-production software. The most important element of the silent movie “Repressed” was the music, and its choice had taken almost half of the project time. In the movie “kreshendō“, the students had tried to “establish the city of Cologne as a character“ by mixing an atmospheric soundtrack with experimental perspectives, time lapses, slow-motion and other effects. The movie about the popular brewage “Kölsch” combined facts on the topic of the local beer with cheerful music and picturesque impressions from the Cologne old town and people enjoying themselves.

At the beginning of the final presentation the students gave feedback regarding their stay in Cologne and at HMKW.

The three video features got introduced by members of the film crews.

The video features were implemented in the Plan-TV-format, which is regularly produced by Cologne students of Journalism and Corporate Communication.

applause for the media productions

“A hands-on experience with professional equipment”, “Shooting a film was a really good experience”, “At HMKW Cologne we got the chance to experiment with what we had already learnt in theory at JAIN University” – these are some of the positive conclusions the students drew about their summer school program at HMKW Cologne.

Prof. Dr. Bettina Lendzian, head of the Journalism and Communication Department at HMKW Cologne, was in charge of the academic program.

JAIN University lecturer Ms. Philip, who accompanied the students to Germany, thanked the representatives of HMKW for the hospitality.

HMKW prorector Prof. Dr. habil. Martin Beckenkamp, too, thanked the guests for the visit and their successful participation in the summer school program.