According to HMKW lecturer Ramzi Fatfouta and Yulia Oganian from the University of California, mouth and nose covers, as they are currently worn, have a considerable influence on decisions in negotiation situations. In their preprint of the study, they have published the first astonishing results on this new phenomenon. 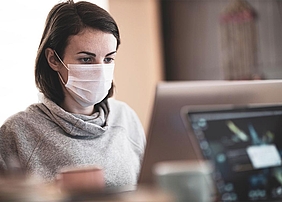 How does a mask influence the effect on our counterpart? (Photo: engin akyurt/Unplash)

In Fatfouta's and Oganian's study, almost 500 probands took part in an experiment called the ultimatum game: two people sit opposite each other, one of whom receives ten euros to divide between them. The other person decides whether to accept the offer or not. If it accepts the division, both receive the negotiated amount. If the other person refuses, neither of them will receive money.

The participants were influenced considerably by whether and which mask their counterpart wore. An (unfair) offer from a person wearing a mask with a medical appearance was accepted more often than from a person wearing a simple cloth or a self-sewn community mask. Subjects with surgical masks were more often assumed to have altruistic motives than participants with simple cloth masks.

The scientists presume that the face covering creates a greater psychological distance, so that decisions are made more on a rational than on an emotional level. Thus, the face mask not only serves as protection against infection, but could also have a significant impact on our current and future social interaction. Stay tuned!