The sixth issue of the Journal of Visual and Media Anthropology presents several articles and short films that explore the themes of social media activism and desires conveyed through digital platforms. 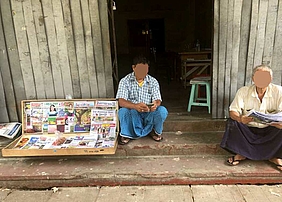 The new edition presented special challenges for the participating researchers and students of the M.A. Visual and Media Anthropology program, as two of the films intended for publication were censored. One film was censored for political reasons and taken down by the government of the filmmaker’s home country before it could be released. Another was flagged and taken down by Youtube’s algorithm for suspected disinformation.

Other films included in this issue dealt with, among other things, racialized experiences of people in the United States and the slogan "white silence is violence", as well as the paradox that white activists may be complicit in the very systems they actually want to distance themselves from with anti-racist language. The film "Forbidden Desires" explores the virtual world of the computer game The Sims and the extent to which it can serve as a platform for the expression of desires that are suppressed in the physical world.

The articles in this issue are particularly concerned with the growing power of large, profit-oriented technology platforms. For the opaque corporations and their oligarchs have now taken control of the Internet's digital space and its material infrastructure. Among other issues, the contributors examine the role of social media platforms like Facebook in relation to political events such as the 2021 Myanmar coup d'état.

Click here for the new issue of the Journal of Visual and Media Anthropology.