Diving deeper into virtual realities: Hazel Jung (student of the Distance Learning program M.A. Visual and Media Anthropology) made this happen during her internship at a South Korean VR production company. What experiences did she gain there and what was a particular challenge for her? This and much more she tells in this interview. 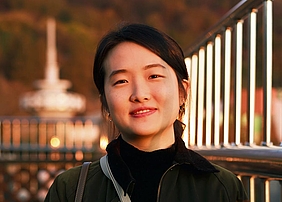 Hazel Jung, student of the master's program Visual and Media Anthropology, did her internship at the South Korean VR production company Giioii.

You are currently working as an intern in a VR production company in South Korea. That sounds really impressive. Tell us more about your internship!

My internship institution is called Giioii, a VR production company based in South Korea. They run projects in any field where VR can prove effective, using art, technology and storytelling.

Currently there are eight members in the company all coming from different backgrounds mainly from film production and directing, art management, and programming. They also make their own original VR experiences, such as Carving with Memory: Ihyangjung, which was selected for the South By Southwest and Missing Pictures, a VR documentary series, in which prominent directors from all around the world talk about films that have never been made but are always in their minds.

How did you come across the internship? How was the application process going?

First, I had an Immersive Storytelling module in the Visual and Media Anthropology program, where Gayatri Parameswaran and Felix Gaedtke were our professors. Previous to this study, I didn’t have too much experience or interest in VR storytelling. When I pitched for my VR work for final project, Gayatri introduced me to Giioii based in South Korea. With Gayatri’s introduction, I emailed and sent my portfolio to the company if I can do an internship. We had a short interview through zoom and introduced ourselves to each other. We thought of it more like a project in terms of working together, rather than working for an institution.

What did you expect from the internship? Could you please tell us more about your goals, task definitions and fields of activity?

Throughout the module in HMKW, we learned mostly about the process, ethics and making of VR projects. Sadly, due to the pandemic, there were some limits to get access to the device and visit the actual studio to get a grasp of how it actually works.

Since it is all about creating experience, I thought this internship would be a great chance to get familiar with the device, being in the environment of virtual space. My goal was to study if this could be a medium where I can tell a story and if so what I should consider as a creator.

This was another field for me to study about interconnection between art and technology, ethical issues concerned among the people working in this field.

Which general and study-related kinds of knowledge, skills and qualifications are you able to apply in the internship?

I feel the core of VR is creating experience inside the device. In order to do so, it requires place, senses, and something to interact. I thought it was in close relationship with phenomenology, in that VR experience was all about showing first person perspective, and the users would perceive that experience with their own senses. Also studying digital anthropology in our module, I first came across with the concept of machinima and creating virtual environments in Second Life. In VR there was a platform called VR chat which was taking the next step from Sims and SL. Instead of looking at the screen, the user would go into the screen and interact with others in avatars. Often there are cases where motion capture is used for animation characters, and volumetric capture where a person's whole body can be captured in 3D and put in the world inside. Watching it on the scene was a more interesting experience to me after learning about it through immersive storytelling.

What was the biggest challenge during your internship so far?

My biggest challenge would be lack of technical knowledge on creating virtual environments. From this internship, I learned it will be inevitable to work with game engineers and 3D modelers in order to recreate the experience in the device headset.

Even though it was not a requirement for people working in VR, and many came from those who worked in 2D and cinema, I think having knowledge on 3D work process would certainly be helpful with the communication and negotiation with the technicians in the team. I didn’t have any background in 3D, so I had to keep looking up terms and learn how they do it. A single VR project involves multiple teams from different fields and each has a different working system, so it was important that I adjust to their style and bridge the steps. It was a challenge because I haven’t been in big projects in 3D, but this internship experience was good training.

In your opinion, from which experiences will you benefit the most in your future career?

The benefit that I take from this experience is considering wider options in terms of using a medium to tell a story. Through this experience in a production team, I learned the overall process of making, and thought about what skills would be useful if I continue working in this field (or direct a VR project).

Before I only thought of working in films, but VR is also an attractive and powerful medium if it fits to the respective content and intention . With the same reason, I think there are still a lot of topics to be discussed and being discussed currently in terms of economic, social and ethical issues surrounding it, issues on copyrights and personal data managed by big tech companies for one. Studying it as a field of digital anthropology can give interesting results on how people behave and form social life in the virtual world.

Last but not least: What is your conclusion about your internship so far? Would you recommend it to other HMKW students?

My previous career was in newspapers and through the VMA program I wanted to learn how to tell stories visually. Since I don’t have too much experience in either film or VR, I felt freer to test out something new, which I think is the whole point about doing an internship. It was a chance for me to experiment if it fits me or not, taking the next step from our immersive storytelling class. Being in the field pushed me to catch up with news in this field, and get access to the latest works. Like in many other working fields, there are some things that you don’t know until you become an insider of a group. In conclusion, I am glad that I took the chance to work in VR which also stirred some thoughts about the experience that we have in person.

I recommend it to other HMKW students even if those who are not in technology, I felt creating an experience actually requires people from a more classical field of study when it comes to constructing a map, characters and recreating human society.

Thank you for the exciting insights into your internship. All the best for the future and much success!