HMKW Berlin has received funding from the BMBF (Federal Ministry of Education and Research) as part of the DAAD call "Ukraine Digital: Ensuring academic success in times of crisis". 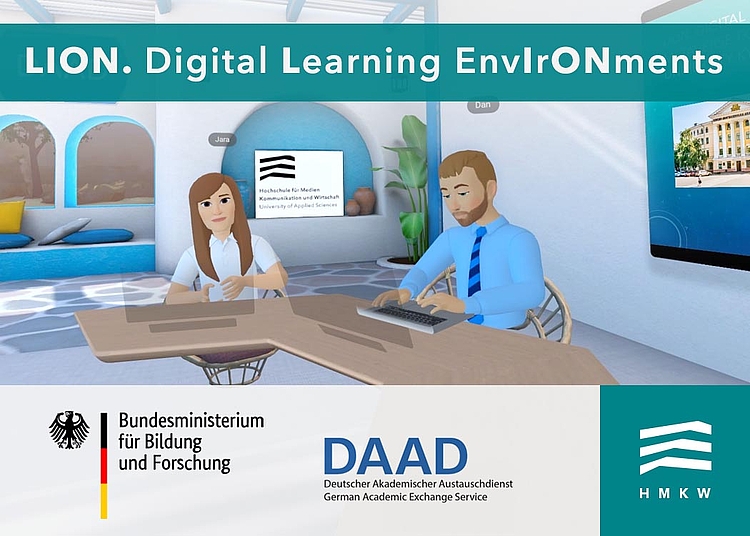 The new project “LION. Digital Learning EnvIrONments in the Metaverse for Social, Cultural and Media Studies” will establish a collaboration between HMKW and the National University of Kyiv-Mohyla Academy. The aim of the project is to share selected online modules of the international Distance Learning Master’s Program in Visual and Media Anthropology with Ukrainian students to ensure study success during times of war. Ukrainian students will be introduced to virtual reality technology in using HMD’s (Head-Mounted Displays) such as Meta Quest 2, having classes in Horizon Workrooms and learning to build and conduct avatar based qualitative research in different virtual environments.

When the full-scale war in Ukraine began, many Ukrainian scholars and students were forced to flee to other countries, with no other choice but to continue their education and research online. During times of war, digital learning technology and virtual environments demonstrate their true power to keep the academic life going, even if buildings are physically destroyed, people are forced to flee to other countries, and a whole nation’s population, including students, professors, lecturers and administration, is spread across many different countries worldwide. Yet, being away from the physical university building, is a deep wound for the identity of the Ukrainian community of learners, teachers and scientists, who lose their place of work and belonging to the scientific community.

The international online MA program in Visual and Media Anthropology with Prof. Dr. Undine Frömming as the director of the program has already brought together visual practitioners from all-over the world, giving them a chance to exchange knowledge and learn in a shared virtual classroom for over a decade. The project will offer scholarships for Ukrainian students to create their own projects in the fields of Digital Anthropology and Virtual Environments under the supervision of lecturers from HMKW.

The collaboration will culminate in a Virtual Think Tank in Horizon Workrooms, bringing together participants of the project LION, HMKW Visual and Media Anthropology students, and invited digital anthropologists to discuss the future of the Metaverse in times of crisis and war. Invited speakers will include Ukrainian scholars at-risk from the National University of Kyiv-Mohyla Academy, who were forced to flee to European countries, and their students, who will take the courses at HMKW Berlin and develop their own virtual reality projects as part of this grant.