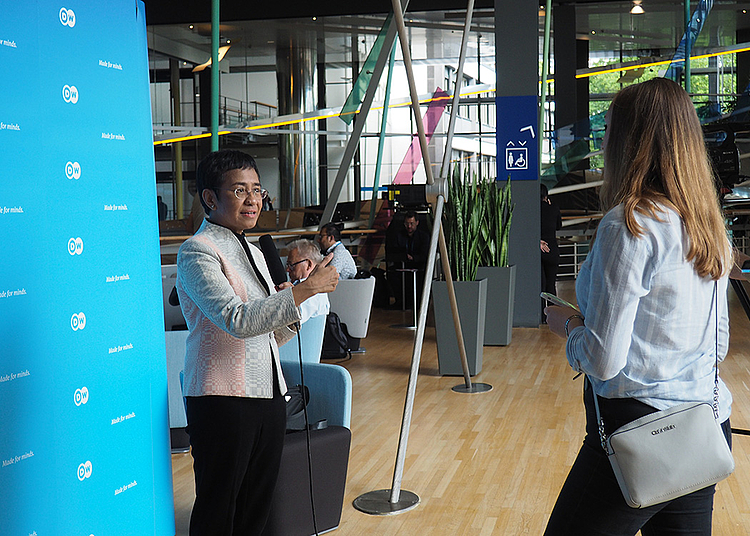 Deutsche Welle's Global Media Forum in Bonn once again gathered hundreds of journalists, reporters and other media professionals as well as leaders from media, academia, civil society (NGOs) and politics from around the world. Under the motto "Shape tomorrow, now!", numerous topics were discussed that are currently affecting journalism and will continue to do so in the future. The relationship between journalism and activism, journalism in and about Africa and the global south, fake news, stereotypes, war reporting, Internet censorship, climate change in the newsroom or agenda cutting were among them. Prof. Dr. Katja Artsiomenka from the HMKW Department of Journalism and Communication also took part in the discussion on Agenda Cutting organized by the Initiative Nachrichtenaufklärung (INA). In keeping with the future-oriented conference motto, the focus of the two-day major event, which was largely held in the former plenary hall of the German Bundestag, was also on young journalists.
HMKW students of the M.A. Digital Journalism followed the program on both days and also became active themselves: For their contributions within a semester project comprising several modules, they had requested interview partners in advance and were now able to conduct and record the conversations. They also took advantage of the unique opportunity to bring Nobel Peace Prize winner Maria Ressa, who had given a keynote speech on the first day, in front of the microphone. We are already very excited about the student contributions on constructive journalism, mobile reporting, diversity in journalism and other exciting topics, which will be published in a blog in the coming weeks!
The grand finale of the event was the evening boat trip on the Rhine, where we could discuss, network and celebrate once again.
HMKW is pleased to have been a supporting partner of this inspiring event with prominent participants such as Claudia Roth, Audrey Tang, Annalena Baerbock (added via video) or Caleb Okereke within the framework of this year's focus on "future journalists and journalism".