Recently, journalism professor Markus Ziener was invited as an expert on the BBC radio program "The Briefing Room". Here he discussed how far the war in Ukraine has had an influence on German politics. 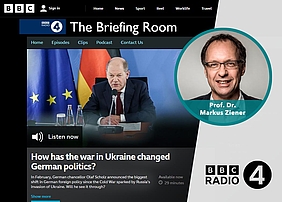 Markus Ziener worked for many years as a correspondent in Warsaw, Moscow, the Middle East and Washington. He has been a Helmut Schmidt Fellow at the German Marshall Fund of the United States until February 2022. In the roundtable discussion, he addressed, among other things, Germany's growing dependence on Russia for natural gas, the beginning of which can be traced back to the 1960s. He also provided insights into German energy policy and controversial projects such as Nord Stream 2.

Listen to the recording of the entire program here