Daniel Schreck (B.A. Graphic Design and Visual Communication) wrote his bachelor thesis on the redesign process of city brands and developed a rebranding concept for the city of Leipzig - and has now been awarded bronze at the well-known ADC Talent Award. He told us in a short interview how the nomination and award came about and what advice he would give to other students from the Department of Design. 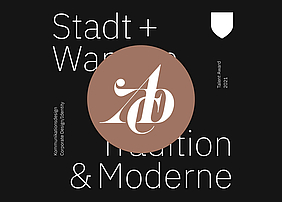 First of all, congratulations on being honored at the ADC Talent Award 2021. What was your first thought when you heard that your thesis had been awarded with bronze?

That my gut feeling was right and the work has paid off. I put a lot of time, heart and soul into the project, was very satisfied with the end result and had the feeling that I had created something relevant and inspiring. This feeling was reinforced by the positive feedback from my supervisors, fellow students, colleagues and friends. The award from ADC is a kind of confirmation on top that even creatives who don't know me personally at all also see it that way. That really feels good.

How did the award come about? Did you apply for the competition yourself? If yes: What convinced you to submit your work to the ADC Junior competition?

I submitted my work myself at the end of last year. I had been looking for a competition where the bachelor thesis would fit in well and where I thought I had a real chance of at least making the shortlist. Both were the case with the ADC Talent Award. This is a competition for young creative talents in Germany, and one of the award categories is "final theses".

What advice would you give to HMKW students who are thinking about submitting their work to the upcoming ADC Junior competition?

It's always worth submitting as long as you are firmly convinced of your work yourself. Additionally, it helped me to get feedback from fellow designers and talk about which subcategory to submit in at best, since the work can only be entered in one subcategory at the ADC Talent Award. It's also good to know that the ADC Talent Award is open to final theses as well as practical/semester projects. So it's worth considering submitting a successful work even before the bachelor's or master's thesis.

Thank you very much for the interview. We wish you all the best for the future!